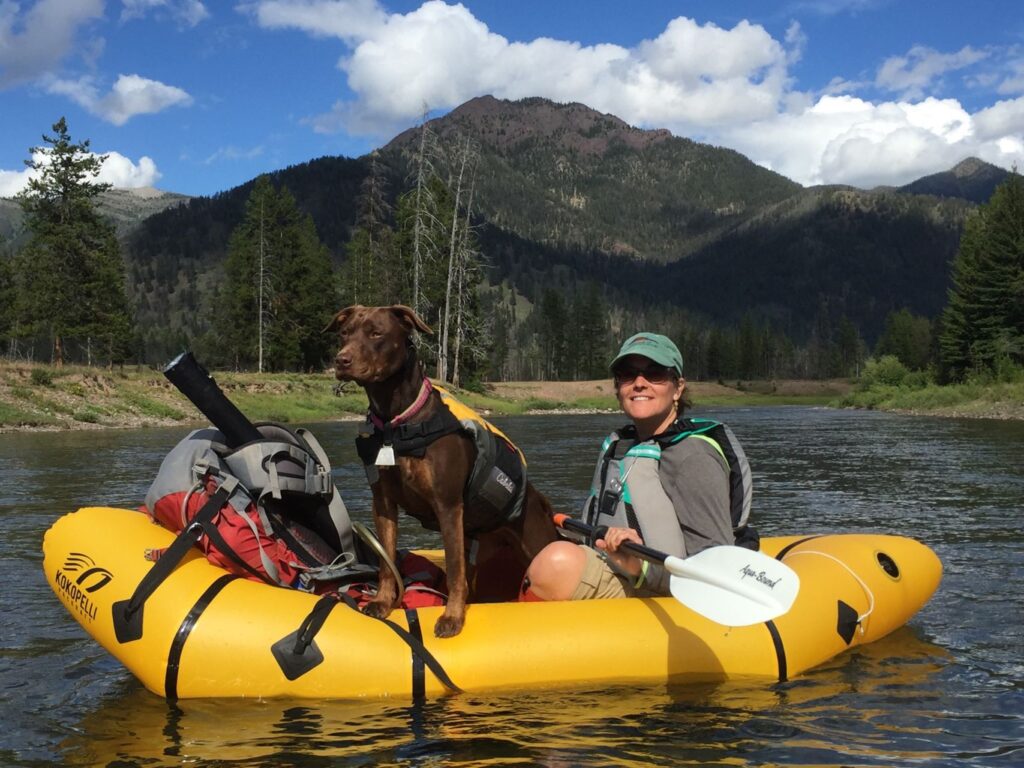 From Texas, to Illinois, to Montana, to now Wisconsin, Jennie Williford’s life has taken turns she would have never expected or predicted, but in the end has given her a deeper faith in the power of yoga and the real benefit of “going with the flow”. Jennie Williford stumbled into yoga initially, but through travels and study and practice has gained what she feels is a well-rounded view of yoga in general and Iyengar Yoga in particular.

Born in New Orleans, Louisiana and growing up in Houston, Texas, Jennie has always been drawn to the animal world. Her first job was in a kennel and before certifications were necessary, was a veterinary technician for many years through college. Beginning on a track toward being a veterinarian at Texas A&M University, she soon found small animal care to be a bit one-note and boring, so switched gears to her first love of gorillas…yes, gorillas. She had every intention of being the next Dian Fossey, with dreams of running around in the jungles of Africa, so ultimately left college with a degree in Anthropology specializing in primate behavior.

Then she met Josh, and the dreams of far off travel took a back seat. Plus, in order to make connections in the primate world, you first had to work with primates. And, the only place to find those state-side is in wildlife rehabs and zoos. Jennie started her career as a zookeeper in San Antonio, TX in the small mammal department where they housed monkeys, bears, small cats, and other various creatures. Once married (1996), Josh got into Physician’s Assistant school in Fort Worth, TX and they moved there together. Jennie soon got a job at the Fort Worth Zoo where she worked for 7 years – both in the World of Primates (with all great apes – Chimpanzees, Gorillas, Orangutans, and Bonobos) and in the Education Department taking small animals to schools.

Marriage was the first thing Jennie never envisioned or planned (she was not exactly a fan of people in general and dating never really went anywhere), and then came yoga….

Yoga was a fluke…or dare we say karma? Jennie’s friends decided they were going to take a class and honestly she can’t even recall knowing what yoga was when they asked. But she thought it would be fun to have a “girls night” once a week, so what the heck! That first class was horrible! Stiff, couldn’t move, wondering the whole time why she had agreed to this insanity, she could have never predicted where it would ultimately lead! Thank goodness it was Continuing Education at Texas Christian University (TCU) because they had paid ahead for the semester and she was stuck.

By the end of the 8 week semester, there was “something” to be said for this yoga, something Jennie couldn’t quite put a finger on. Not that she was any more physically flexible, but her mind was a little more settled, a little less anxious. So, she signed up again…and that is when the clouds parted.

A new teacher was there at the front of the class and class was moved from the florescent lit education building to the warmer chapel space. At the end of the first class with the new teacher, she took a moment to explain that aside from the physical practice of yoga, she also taught the philosophy behind it and if anyone had any questions about this (being at a Christian University of course) that she was open to discussion. Jennie’s ears perked up, and at first reading, The Yoga Sutras unlocked some understanding of her life and brain that made her hungry and thirsty for more.

Jennie continues to say that Melanie Murray, that teacher all the way back in Fort Worth, was her most influential because she knew her limit, and at the end of a couple of years of classes and private lessons with her, she sent Jennie off to “the Big City” of Dallas to take classes at a real-life yoga studio!

It was there at The Dallas Yoga Center that Jennie was exposed to all sorts of styles of yoga: Power, Iyengar, Jivamukti, Ashtanga, Vinyasa, and Kundalini. All of them were amazing in their own way, but Jennie kept going back to the Iyengar classes feeling that what was laid out in The Yoga Sutras was being taught in a practical and accessible way. Instead of high and chattery after an amazing Vinyasa, she was grounded, whole, even able to release certain emotion and fear. And, in the end, a teacher there also introduced her to the Dallas Iyengar Yoga Studio and there Jennie’s true Iyengar Yoga journey began.

In the subsequent years, as yoga took over, Jennie realized that the zoo work would not be her career, but didn’t quite know what was next. Enter karma again and Melanie was moving out of town and wanted her to take over teaching yoga classes. Within 2 weeks, Jennie made a life changing decision to quit the zoo and teach yoga. Josh was a bit suspect of this; knowing that she was shy, literally saying only the EXACT 9 words needed to secure their matrimony in front of friends and family and NEVER teaching anything at all, but still, he was supportive. Jennie knew the Iyengar Yoga Certification process was daunting, so she took a 200hr Yoga Alliance training course at first.  And, though helpful in its ability to get her standing in front of people without having a panic attack, 200hrs was not enough to truly teach her to teach.

In 2002, a mere 4 years after starting yoga, Jennie embarked on her life commitment to the subject of Iyengar Yoga. She took her first Certification Assessment in 2004 and has continued her studies through traveling to workshops and making 5 trips to India (1 to Rishikesh and 4 to Pune). Since her move to Illinois in 2006, Jennie has not been in a town with a regular teacher, but has been a long distant student of Chris Saudek and Laurie Blakeney (Ann Arbor, MI) for over 15 years. At first , being away from regular class was devastating, but in hindsight, Jennie feels that  is the reason her practice has become such a personal friend and companion, giving her deep insight into herself and her connection to the world.

Another important practice in Jennie’s life is Vipassana Meditation in the tradition of SN Goenka. A fellow Iyengar Yoga student introduced her to the practice in 2005, taking her first 10-day courses in Dallas. She became an active volunteer at the Vipassana Center in IL and has taken courses regularly to keep her practice up. The combination of this sitting practice and the more active practice of Iyengar Yoga has been a boon to her entire life. Yoga has taken her from being a shy, quite angry and anxious child/young adult to a functional, happy, grateful “adult”. This is a pretty amazing feat in her own eyes.

Jennie has also been an active volunteer within the Iyengar Community, serving on the board of the Midwest region for 7 years and helping to organize the first regional Iyengar Yoga conference in Chicago in 2011. In Rockford, she ran her own studio for 9 years and has fallen in love with teaching, which surprises her each and every day.

Outside of practice and teaching yoga, Jennie has always been an avid and active outdoor person. You will find her happy on the trail with her husband and dog, hiking or backpacking. Her dog Ruby and cat Shale are the lights in both Josh and Jennie’s lives! Many years ago she learned to fly fish here in the Driftless region and is happy to be back in this beautiful area for more adventures! She is constantly thankful that Josh has put up with her transformations and travels over the years. They have moved because of his jobs, some successful and some not-so-much, but there has always been something to learn along the way.

Jennie’s hope is to light the spark of yoga in each and every student (and sometimes random strangers). The fluke that changed her life is bound to change someone else’s given the chance!

Jennie is new to LaCrosse, so would love to see some new students come and try her classes at The Yoga Place! You can find her on Monday evenings at 5:45pm and Thursdays at noon  teaching “Intro to Iyengar”, and feel free to drop in on her mixed level class on Wednesday mornings at 8:30am !  She also loves to share her knowledge and engage students in yoga outside the regular classroom setting, so look for interesting workshops with Jennie throughout the year.

So many more stories to tell as life unfolds here in LaCrosse!