Sage Marichi – A “Light” of Yoga 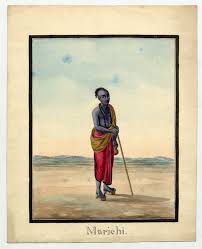 I hope all of you enjoyed week 2 of our Sanskrit lesson of the body parts! Are you able to repeat a few of those simple names for your hands, feet, and knees?

This week of our Sanskrit tutorial will focus on another great person of Hindu mythology, the sage Marichi. There are 4 poses named after this sage, as well as a few adaptations and variations that are commonly done in yoga class.

With so many poses named after him, you might think he plays a huge role in the stories and myths, but oddly enough he is not a big “actor”. However, without him the continuing story and history of creation would not be possible, so I guess that is kind of a big deal.

I was briefly excited to get to delve into this sage because if you look in Light on Yoga, BKS Iyengar does not say much – “This asana is dedicated to the sage Marichi, son of the Creator, Brahma. Marichi was the grandfather of Surya (the Sun God).” Well, ok, but where are the battles, the drama, the impact? So, I went looking into some other sources and low and behold that is about all that is said. His name is everywhere as the son or father or grandfather of more important players in the Universe…literally. But virtually nothing is said about his own life.

Brahma, the father of Marichi is one of a trinity of Gods in Hinduism. Brahma is the Creator, Visnu is the Sustainer, and Siva is the Destroyer. The whole of creation exists because of Brahma, and Marichi is the “ray of light”, one of his 10 sons. Marichi is also in some places referred to as a powerful being of storms and tempests. So, obviously he is an intense figure, yet outside of just “being” there is not much said.

His son, Kasyapa, is a bit more prominent in writings as a great sage of the Vedic times; come to next Sunday’s workshop to find out where that fits into history. Kasyapa is the product of Marichi’s marriage to the goddess Kali, who is also much more prominent within the mythology, so I guess she became the big player in that relationship.

Marichi’s grandson, Surya the Sun God, also is found within the practice of yoga as the Surya Namaskar or Sun Salutation. In some traditions, the 12 names of Surya, which are his listed powers and qualities, are chanted along with the practice of the flow of poses.

The other interesting thing I could not find was a lot of imagery of Marichi. The one small painting that Google brings up, other than all the asana pictures, is from a British museum and depicts a simple sage with a simple background…quite unlike most of the imagery in India that is full of drama and color!

So, for me, I will look at Marichi as an important “link” in the experience of creation. And look at the Marichyasana poses which include twists and forward bends, extensions and contractions, as important to our experience of our own internal creation. As we take each in their stages, they link us back to important pieces of our Self and shed a “ray of light” on the future to come.