The Fundamental Fact of Suffering 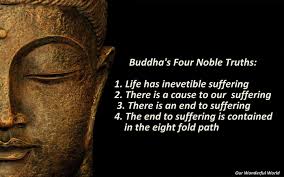 “If you confront your problems rather than avoid them, you will be in a better position to deal with them.”

HH The Dalai Lama – “The Art of Happiness” – Chapter 8

In Chapter Eight of “The Art of Happiness” by HH The Dalai Lama, we get into the foundational tenets of Buddhism, The Four Noble Truths.

All this talk of suffering does typically seem like a big downer for most American westerners. Aren’t we supposed to live happy, pain-free, disease-free, death-free lives? Well, that kind of thinking is actually where we first encounter our downward spiral away from happiness. Instead of facing the reality of suffering, we come up with a truck-load of strategies to avoid and ignore that basic truth. Then, when suffering happens, we are shocked, awed, and unprepared for its impact.“Our attitude toward suffering becomes important because it can effect how we cope with suffering when it arises.”

Within this chapter, The Dalai Lama details an example that rings true for me ever since my first visit to India.

“Although pain and suffering are experienced by all human beings, I have felt that those brought up in some Eastern cultures appear to have a greater acceptance and tolerance for suffering. Part of this may be due to their beliefs, but perhaps it is because suffering is more visible in poorer nations such as India than it is in wealthier countries. Hunger, poverty, illness, and death are in plain view. When a person becomes old or sick, they aren’t marginalized…

As Western society gained the ability to limit the suffering caused by harsh conditions, it seems to have lost the ability to cope with the suffering that remains…In this context, a relatively minor trauma can have a massive psychological impact as one loses faith in one’s basic beliefs about the world as fair and benevolent…

…as suffering becomes less visible, it is no longer seen as part of the fundamental nature of human beings – but rather as an anomaly, a sign that something has gone terribly wrong, a sign of “failure” of some system, an infringement on our guaranteed right to happiness!”

We see this phenomenon in yoga all the time! Students come to us with a certain amount of “wanting to avoid pain” or “wanting to push away uncomfortable thoughts”. Magazines and surveys assure us that the practice of yoga will take away bodily pains, not cause more bodily pains, and keep us out of experiencing stress, anxiety, depression, etc…We treat yoga as just another strategy for avoidance instead of its true goal of ultimate awareness.

Yes of course, as with the eightfold path of Buddhism leading out of suffering, yoga also gives us an 8-limbed path toward “avoiding the pains yet to come” (this is the topic of our next Yoga Sutra discussion on July 26th). However, what we choose to ignore is all the work that goes into that process, focusing only on the beautifully promised end! And it is the work in yoga and in the eightfold path that covers all the obstacles that must be faced head-on unless we want to stay mired in their suffering over and over again.

To avoid future pain takes effort in becoming stronger and more resilient in body and mind now! This effort usually brings up some physical soreness and very often even emotional discomfort of facing inner truths that are habitual and not helping our progress. When yoga is approached as an avoidance mechanism rather than the work, these experiences of pain or discomfort may make us turn away from the very practices that will ultimately save us. Our expectation of “no pain and suffering” send us looking elsewhere for the next “happy place”. The true 8-fold and 8-limb paths are full of facing our own suffering for the ultimate end of pure happiness and undisturbed consciousness.

But, don’t let the work get you down! Every tiny piece of knowledge that we become aware of within our own being and Self is a powerful bit of information that frees us of a burden. It is another step on the path out of ignorance and another reminder that we will destroy suffering through our own work and action, ultimately discovering the art of happiness.