A Yogi Named Perry from Iowa! 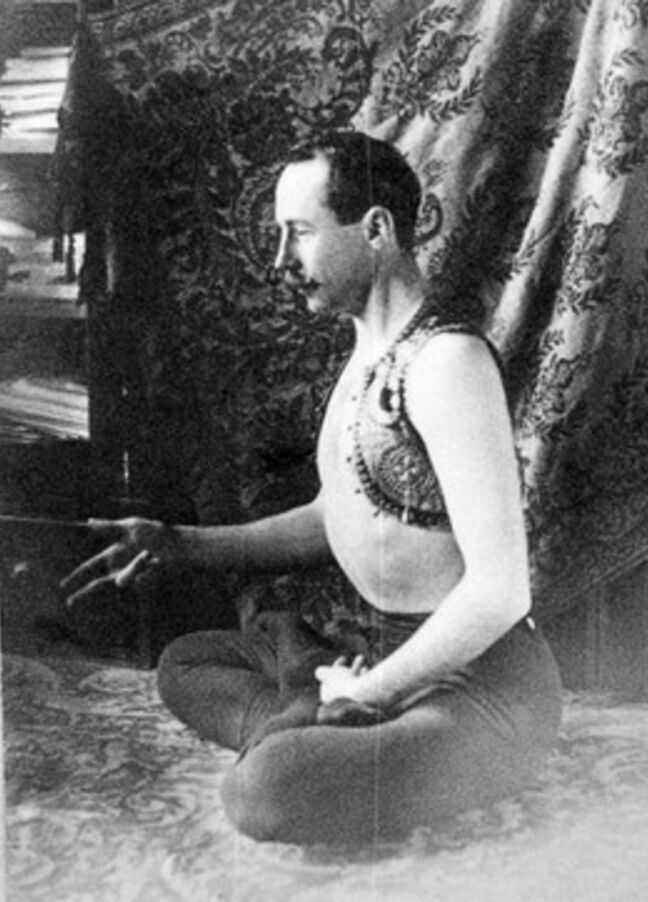 I sure hope you will join The Yoga Place in reading The Great OOM by Robert Love this summer. I have read it before, but starting it again at this time in my life with the conversations about yoga and tradition within our community and our Yoga Sutra Study group at the third chapter of “special powers”, it seems very very timely.

I love that the author of this book, Robert Love, is not really a yoga practitioner. He has dabbled in it, but came to this story of Pierre Bernard (nee Perry Baker from Leon, Iowa) when he moved into a neighborhood of homes that were once part of the community built by The Great OOM. I appreciate the fact that he can look at what “yoga” has become today as just one small piece of a grander whole and he takes a good amount of time to contextualize the subject for his readers.

Hatha Yoga is generally what we think of as “yoga” here in the West. It is the physical subject of using the body as our spiritual pathway to enlightenment. There are other paths of yoga, including Tantra (mentioned in the book), that are very misunderstood in our culture and society even to this day. Tantra is well known and misunderstood ONLY for its “sexual aspects”, but is actually a philosophy of yoga that includes mudras (hand symbols), mantras (chanting), and the engagement in ALL THINGS (yes sex included) as a spiritual endeavor.

As the first immigrants came from the East to the West in the late 1800s with these types of philosophies, religions, and practices, yoga was seen as taboo, uncivilized, and cultish. And though Pierre did not necessarily help this viewpoint during his lifetime, he did try to bring yoga to the forefront through his emphasis on physical and mental vitality and health while profiting greatly from it throughout his lifetime. For better or for worse, as Robert Love points out “Bernard’s life story is the untold tale of how yoga became American”.

This tale is mystical from the very beginning, as when Perry Baker meets a Syrian Indian named Sylvais Hamati in Lincoln, Nebraska the odds of meeting were nearly impossible. Love points out that at this time there were fewer than 800 Indians IN TOTAL who came to the US between 1820 and 1900. Hamati becomes Perry’s full-time mentor and tutor of all things yoga and Indian philosophy – including postures, pranayama (breath control), meditation and concentration – for 18 years of his life.

It does not take long to begin a full transformation from “small town Perry from Iowa” to “Dr. Pierre Bernard living in San Francisco”. Self-proclaimed Professor Bernard then began doing demonstrations of his ability to hypnotize himself and others and started to see “patients” for nervous disorders and other therapies, mingling among the rich, the famous, and the young.

This timing is also significant as Love points out, providing “Bernard with a front row seat – and backstage pass – as the first wave of Indian swamis (like Vivekananda) arrived in the US”. These swamis taught more the ascetic forms of yoga, finding the focus on the body as “dangerous and unnecessary to enlightenment”, but Bernard carried on and was well on his way to becoming rich and famous himself.

You won’t want to miss this amazing tale! A charlatan or a yogi? A healer or a swindler? Super powers or super shady? I am curious to know what you think…