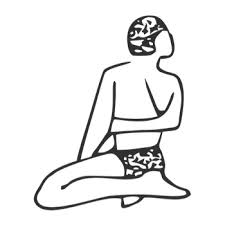 Obviously I am a bit behind on the blogs for Sanskrit…leaving off at Bharadvajasana. This week, as our lesson of Sanskrit on the bulletin board has come to a close, I encourage you to take another look, even take a photo if it helps you along your journey of learning. And I will take this time to finish off the lessons in writing!

Bharadvaja was a great figure in the historical Vedic period of India. The Vedas are the oldest scripture of ancient India that cover the basic rules and regulations of life, culture, religion, and ritual. The “seven sages” (sapta rishi) are the figures said to have brought the wisdom of the Vedas down to earth from the heavens. Bharadvaja is one of those seven and according to some writings was a scholar, economist, and physician.

His mythology suggests that Bharadvaja spent lifetimes of study and practice in solitude and seclusion. After three lifetimes of being a recluse, Siva (one of the Divine trinity) came to him on the fourth recognizing him as a great scholar, but reminding him that that was not the true nature of a sage. He must go out to share his wisdom with others and guide them in their practice and life.

Bharadvaja takes this advice and from then on, he spends numerous lifetimes in teaching and service of others, fulfilling his true dharma (purpose) as a sage.

Bharadvajasana is a seated twist with two variations and numerous ways to approach it for any level and ability. Whether done in a chair after back extensions, or after a Sarvangasana (shoulder stand) to continue to quiet the consciousness, Bharadvajasana is a foundational twisting pose that begins to challenge our mental and physical connections.

Creating a firm and stable foundation to then rise and move from is key in this pose and in life. Are we able to stay connected and reflective as we are turned in one direction or another?