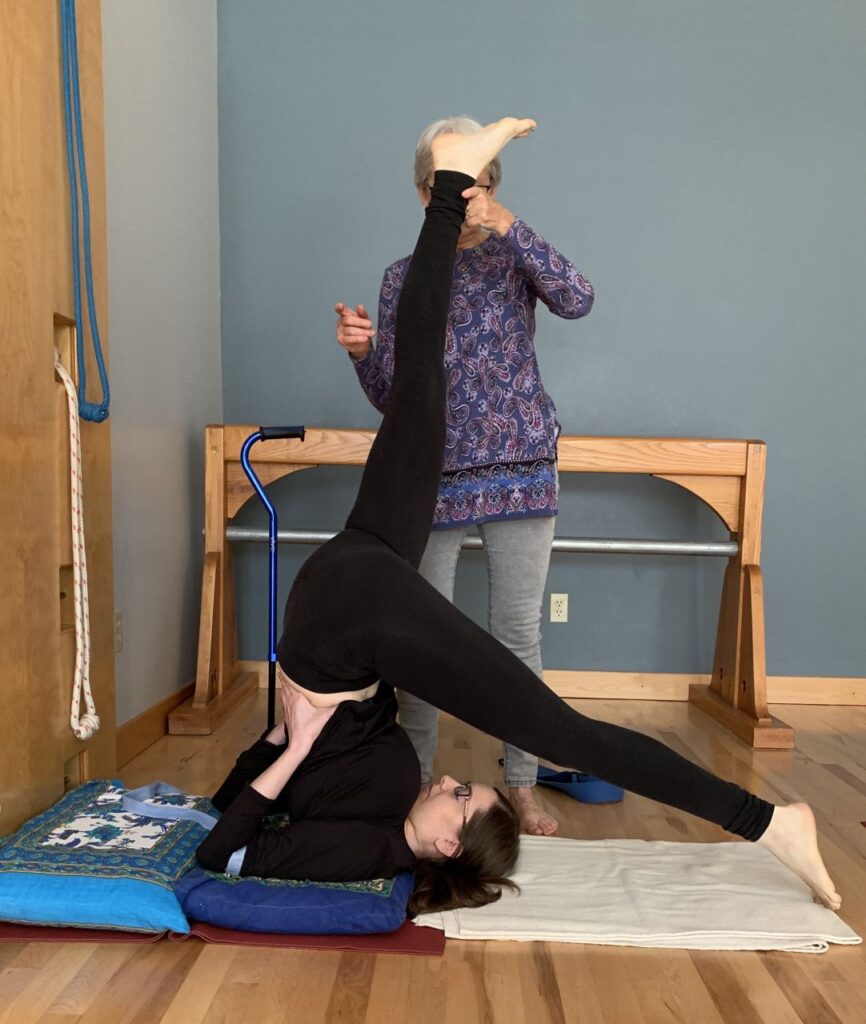 I first met Sara Anderson, author of STROKE: overcoming my worst nightmare, when I moved to LaCrosse in April. Being a student of Chris Saudek’s and interested in her therapeutic yoga work with Sara, I sat in on some of their private lessons together and immediately was moved by the amount of work they had done, the joy that was in the room, and the compassionate relationship they had with each other. I since have had the privledge of working with Sara a few times in Chris’s absence and so was very excited to hear that her book was coming out and that we would have a book signing event for her here at The Yoga Place.

Sara is a native of Westby, WI, and though she had moved off for college, travel, and ultimately a job at the University of Southern California in LA as an ESL professor, she has been back in Westby for the last 10 years following a devastating event that no one would have predicted. At the age of 27, Sara suffered a massive cerebral stroke due to incompatible medications for migraines with aura and estrogen-progesterone hormones of the pill. The massive stroke left this young, vibrant, healthy, and active woman with a body she didn’t recognize and years of recovery, not to mention a whole different life ahead of her.

Recovery for Sara included all the typical therapies – speech, OT, PT, etc…But, after spending 6 months in hospitals and a nursing home in CA and five years of recovery here in LaCrosse, Sara’s mom by chance read an article about Chris Saudek in the paper and immediately knew Sara needed to give Iyengar Yoga a try. From reading STROKE, it seems that Sara’s mom has a great 6th sense. She knew in her heart that Sara would “be ok” after the initial shock of the stroke event, and so of course Sara knew that she should listen to her mom and go to yoga.

The stroke effected both sides of Sara’s body, with the worst effects on her left side. She did have to learn to speak again, but more muscularly as her memory and learning areas of her brain were untouched and intact. She lost all balance and coordination and spent a long while in bed and then in a wheelchair weakening quickly, so it has been a long road to walking again. Knowing all of that, to see Sara in her yoga postures is inspiring and amazing!

Sara will say that Iyengar Yoga became her most stabilizing and supportive therapy. Overall it has surprised her in gaining back balance in standing, with strength of core and spine increasing. Chris pushed her in ways that other therapists may not have and had constant faith in Sara’s ability and capacity to progress. Sara mentioned in my brief interview for this blog that “Chris knows my body better than I do”. To watch them work together you see this immediately. And, to read the book you can still hear the self consciousness of being a young woman, doubting looks and ability when all facts show the contrary. Sara holds within her a joyful spirit and has to have courage to be where she is today.

Sara’s yoga practice is deliberate and thoughtful by necessity. To not be means to lose balance and fall. But, she also just works hard and knows that each movement and each pose (even the ones she hates) are there for her to use as tools to get better, to progress, to truly live more fully in the world. Those of us more “able” of body stand to learn a thing or two from her perseverance and her willingness to just try in the face of all that seems impossible.

Join us at The Yoga Place for a book signing and Q&A on Friday, Nov 1. If you are a woman taking hormones, a traumatic event survivor, a caretaker, yoga student, yoga teacher, or just someone living life…Sara’s story has something for YOU!