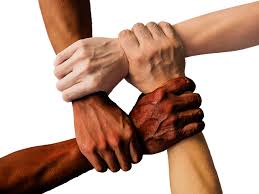 This week we read Chapter Five of “The Art of Happiness” by HH the Dalai Lama, and I have to say I was intrigued by much of what was presented. I enjoy and relate to all the skepticism and questioning of Dr. Cutler. His observations and questions are great initiators for the concepts that the Dalai Lama has to share.

This chapter is especially poignant in our current times. Covid is keeping us physically apart and feeling “lonely”, while at the same time, discussions around systemic racism and white privilege are reminders of how interconnected we all are whether we choose to see it or not.

Dr. Cutler starts the chapter by asking The Dalai Lama if he ever gets lonely and is surprised by the answer he gives – “No.” Pressed for an explanation, The Dalai Lama returns to the concept he covered in the previous chapters, “developing compassion”.

“I look at any human being from a more positive angle, I try to look at their positive aspects. This attitude immediately creates a feeling of affinity, a kind of connectedness. And it may partly be because on my part, there is less apprehension, less fear, that if I act in a certain way, maybe the person will lose respect or think that I am strange. “

“And once you encourage the thought of compassion in your mind, once that thought becomes active, then your attitude towards others changes automatically…And with that attitude, even if the other person is unfriendly or doesn’t respond to you in a positive way, then at least you’ve approached the person with a feeling of openness that gives you a certain flexibility and the freedom to change your approach as needed.”

These ideas resonate with me and my experience of the results of practicing yoga and Vipassana Meditation. Before practicing, I lived in the vicious cycle of negatively approaching life and other human beings, always being skeptical and assuming the worst, in turn feeling isolated and lonely even when surrounded by friends and family. But with practice, I now experience the world from a deeper seed of compassion. Understanding the harmful tendencies in my own mind and being able to peel away their influence has made it easier to relate to and connect with people of all kinds and natures. I still think “intimacy” is an interesting word to use, but I would agree that “By broadening our definition of intimacy, we open ourselves to discovering many new and equally satisfying ways of connecting with others.” (Ch 5, Expanding our Definiton of Intimacy) And isn’t that what we truly need now in the time of Covid? Yes, we are social beings in need of this “intimacy”, but we can always find it if we are open to looking in different ways and with expanded outlooks.

The other pertinent concept for our times that came up in this chapter was under the heading “Dependence on Others Versus Self-Reliance“. Dr. Cutler at first has a feeling of resistance to the idea of society’s innate “interdependence” of individuals and how that might contribute to our happiness. As mostly middle-class white privileged individuals partaking in this modern yoga phenomenon, we sit in great comfort with the belief that we are completely independent and self-reliant. However, this is a social and historical fallacy that has perpetuated deep feelings of fear, anger, distrust, aggression, and ultimate violence. As Dr. Cutler experienced the unraveling of one thread of his shirt, contemplating all those who were involved in making that shirt, his resistance softened. And, as I read the following paragraph, I could not help but put it into context of our American History and relationship to people of color. And, like him, I wanted to cry.

“I began to think about how many people were involved in making my shirt. I started by imagining the farmer who grew the cotton. Next, the salesperson who sold the farmer the tractor to plow the field. Then, for that matter, the hundreds or even thousands of people involved in manufacturing that tractor, including the people who mined the ore to make the metal for each part of the tractor. And all the designers of the tractor. Then, of course the people who processed the cotton, the people who wove the cloth, and the people who cut, dyed, and sewed that cloth. The cargo workers and truck drivers who delivered the shirt to the store and the salesperson who sold the shirt to me. It occurred to me that virtually every aspect of my life came about as the results of others’ efforts. My precious self-reliance was a complete illusion, a fantasy.”

This interconnectedness is not a negative. It is the tight weave of the cloth that holds society together and can be the source of all our rights to happiness. But, we have to be open to the reminders and the acknowledgements of ALL the people who have taken part in the creation of the whole. To ignore or eradicate one piece or people is to keep pulling on that one loose thread of a shirt. At some point it will all unravel unless we find ways to strengthen and patch it back together.

“The Dalai Lama’s model of intimacy is based on a willingness to open ourselves to many others, to family, friends, and even strangers, forming genuine and deep bonds based on our common humanity.”