The Seed of Compassion 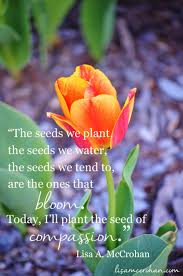 In the first part of “The Art of Happiness” by HH The Dalai Lama, we found that happiness is a “right” that we ALL have. But where to find it and how to experience it is truly the biggest question of humanity.

In Chapter Three of the reading, we find the first stages of the process toward happiness are learning, training and discipline. As in yoga, we must first learn about ourselves – our habits and tendencies toward negativity, hatred, and harmful actions – to ultimately effect change in our life.

“Once you yourself are filled with hatred or negative emotions, then the other people appear to you as also hostile. So as a result there is more fear, greater inhibition and hesitation, and a sense of insecurity…”

“If you maintain a feeling of compassion, loving kindness, then something automatically opens your inner door. Through that, you can communicate much more easily with other people. And that feeling of warmth creates a kind of openness. You’ll find that all human beings are just like you, so you’ll be able to relate to them more easily.”

HH The Dalai Lama – “The Art of Happiness” Chapter 3, under “the path to Happiness”

“Bringing about discipline within one’s mind is the essence of the Buddha’s teaching”. (Art of Happiness, Ch 3, Ethical Discipline) and this also is the “goal of yoga” as stated in Yoga Sutra I.2 – “yoga is the cessation of fluctuations within the consciousness”. Training and Discipline do have to happen at the level of the mind. Only then, will changes in action and reaction follow. But this TAKES TIME ! It is not a simple mental exercise or a gathering of superficial knowledge, but takes a deep change in how you think and what your intentions are. We know that just feeling bad has a negative effect on our health and well being and having ill will towards others eats away at our own happiness.

“Changing how we perceive ourselves, through learning and understanding, can have a very real impact on how we interact with others and how we conduct our daily lives.”

But really, looking at the world around us and sometimes even within us, it can appear that this task could very well be impossible. Aren’t we selfish and out for our own individual gain? Even when we are tuned in to our own happiness, can that really create a change in the outer realm? Howard Cutler, MD, the coauthor of this book asks all these questions of HH The Dalai Lama in these chapters.

However, HH The Dalai Lama stands firm in Chapter Four – “In fact, it is one of my fundamental beliefs that not only do we inherently possess the potential for compassion but I believe that the basic or underlying nature of human beings is gentleness.” (Chapter 4, Our Fundamental Nature) We learn this in a different way in yoga, but with a similar foundation – our True Self (purusa) is pure consciousness untouched by distraction, duality, or individual “I-ness”. Anything outside of this purusa and according to The Dalai Lama, anything outside of our innate compassion, is part of a misuse of Nature and superficial intelligence.

“Over the past two or three decades, there have been literally hundreds of scientific studies indicating that aggression is not essentially innate and that violent behavior is influenced by a variety of biological, social, situational, and environmental factors.”

“All humans may be endowed with ‘the seed of compassion.’ When exposed to the right conditions – at home, in society at large, and later perhaps through our own pointed efforts – that ‘seed’ will flourish.”

The Art of Happiness – Chapter 4 – The Question of Human Nature

I will say, that this chapter spoke to me greatly and reminds me a lot of my own journey with yoga and Vipassana Meditation (a seated practice with a foundation from the Buddha, though is non-sectarian in practice). I actually used to be one with a GREAT AMOUNT of distrust and hatred for the acts of human beings within the world and toward each other. I was a major environmental and animal activist, and though great causes that I still hold true, unfortunately filled me with anger, depression, and hopelessness. In comparison to the animal world, I saw humans beings mired in suffering and destruction. However, with practice and discernment and understanding of my own mind and mental tendencies, yoga and meditation made it very clear that we ARE all endowed with this “seed of compassion”. Due to our experiences or stories or fluctuations, we become reactive and violent, but we can change that with practice and discipline and training.

I would not say it was an “immediate change” for me, but as The Dalai Lama suggests, “Once we conclude that the basic nature of humanity is compassionate rather than aggressive, our relationship to the world around us changes immediately.” (Chapter 4) The way I live in and view the world now is a complete turn-around from my younger years and I thank the practice and training of my mind through yoga and meditation as the key.

In the wake of all that is happening in the world today, I am continually surprised at my ability to stay hopeful. These recent months have forced society to learn about and see some much needed truths, however uncomfortable they are! Facing isolation and death (both physical and economic) has ripped open wounds. Fear and hatred of one race toward another has eaten away at the fabric of our society. We live in a world where a large part of our community has suffered generations without the same rights, freedoms, treatments, and education, and this bears heavily on all of us. This is not a problem of “the other” but a problem of us not being able to tap into our innate compassion and act in the world accordingly.

But it isn’t hopeless. We have the tools and the training and the ability to think better, act better, and ultimately do better. We just have to choose to use our time wisely moving forward.

“I believe that the proper utilization of time is this: if you can, serve other people, other sentient beings. If not, at least refrain from harming them. I think that is the whole basis of my philosophy.”