Less is More – Even in Breathing 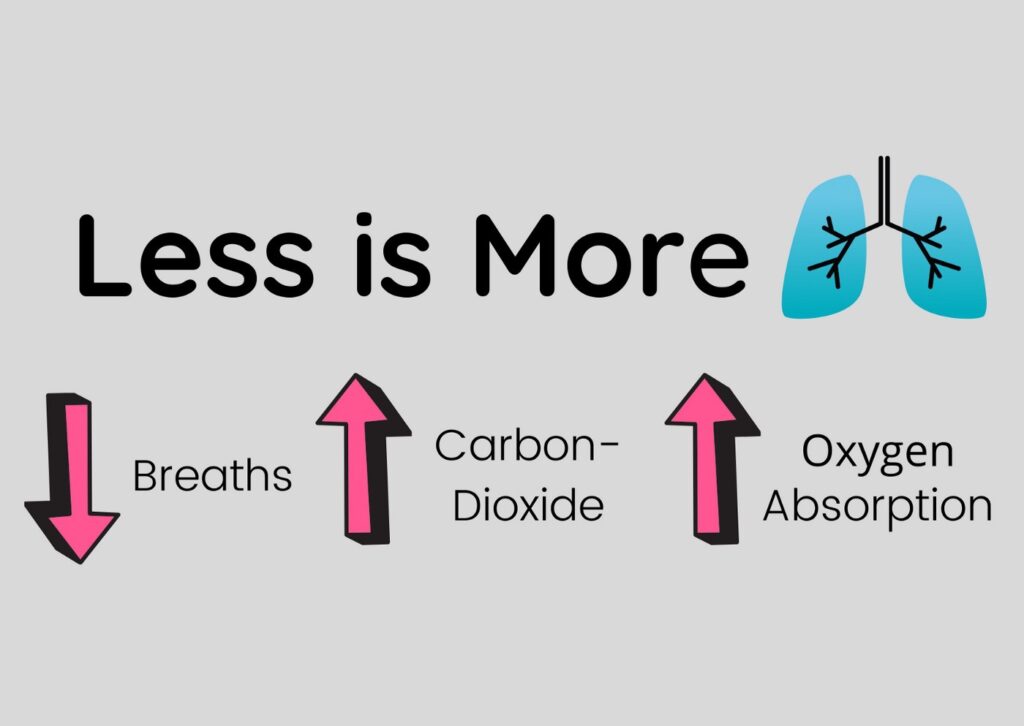 Chapter 6 of BREATH by James Nestor is entitled “Less” and is a continuation of the last couple dealing with slowing down the breath and increasing the time of exhalation for optimum health and wellbeing through breathing. Nestor makes the observation that every “pulmonaut” he has met over the past several years of his experimentation and research have all agreed that we have “become a culture of overbreathers.” His friend Olsson takes him on another adventure in breathing in this chapter and states that “occasionally willing the body to breathe way less…has some potent benefits just as fasting does. Sometimes it can lead to euphoria.”

They proceed to embark on a run through Golden Gate Park where Olsson trains Nestor in the breath restriction that has been called numerous things over the years – “hypoventalation, hypoxic training, Buteyko technique, and the pointlessly technical ‘normobaric hypoxia training’.” All of these techniques arose from experimentations by those who cared for people with hypertension, asthma, heart disease, etc… Many of whom noticed that those in the worst health breathe the fastest and the most. This chapter also again highlights numerous examples of athletes who increase their stamina and speed by this breathing technique, including one of the “Greatest Runners of All Time”, Emil Zatopek, and the US Men’s Olympic Swimming team in Montreal which had “the greatest performance by a US Olympic swim team in history.”

These are some amazing results, but as Nestor finds out, just like any training, training ourselves to breathe less proves to be a difficult and sometimes unpleasant journey. There is pure struggle and effort to be put in for any ultimate goal of ease or enlightenment. And, it is unfortunate that many studies that Nestor uses for examples ultimately seem to be thrown out by modern Western Science for one reason or another. I know that we have rigorous needs of proof in our society, and I am a firm believer in science for sure, but I am also intrigued by the results he highlights so far in this book. Can we just ignore them? I know that I cannot ignore the wisdom of yogis that seemed to have known so much that is now proven by modern science. I think Nestor takes an interesting approach to be his own guinea pig under all of these circumstances – very much like the original yogis.

In the end of the chapter, Nestor ties in the reminder of the need to hold onto and even increase our carbon dioxide levels in order to avoid “buffering” in the kidneys and elsewhere in our cells. Buffering in the kidneys and in the cells depletes our body of needed minerals and can lead to the breakdown of physical structures. It is clear that breathing slower, exhaling longer, and breathing less can be a balm to so many issues despite what particular techniques you choose to take on.

Though skeptical at first, Nestor finally reached a bit of euphoria by the end of his training run with Olsson. And, BKS Iyengar finally gets a “shout out” at the end of the Chapter, as I mentioned in my last writing, I would also consider him a true “pulmonaut”.

“The yogi’s life is not measured by the number of his days, but the number of his breaths.” wrote BKS Iyengar, an Indian yoga teacher who had spent years in bed as a sickly child until he learned yoga and breathed himself back to health. He died in 2014, at age 95.

Quoted from the end of Chapter 6 – BREATH by James Nestor

So, this week we celebrate Guru Purnima, the celebration of our teacher and Guru, BKS Iyengar. Keep breathing of course – just LESS ! And definitely keep joining us in reading BREATH for our Summer Book Club at The Yoga Place!