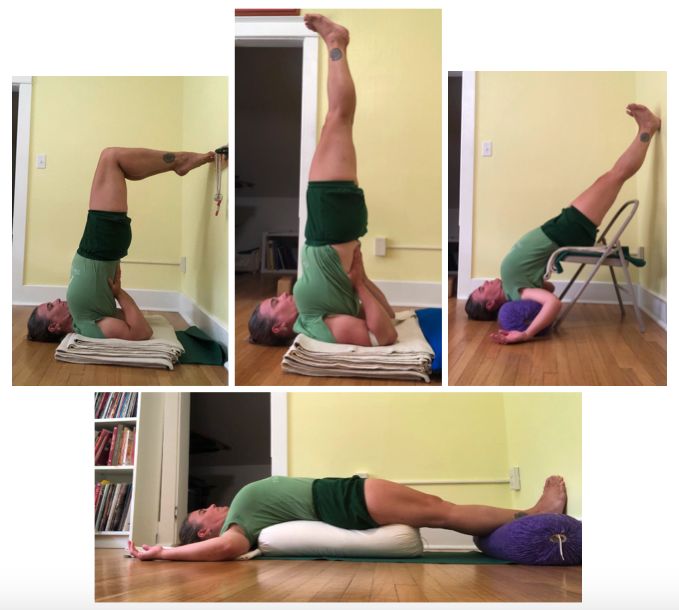 As yoga teachers, we don’t get the question about standing on the shoulders as much as on the head. For some reason, Sarvangasana – short form “shoulder stand” – seems more approachable and less intimidating. And, yes, it is an easier pose to learn, with more access and stability for those who struggle with balance, but like Sirsasana (head stand), the importance of this pose cannot be underestimated.

The actual translation from the Sanskrit Salamba Sarvangasana is “all limbs supported pose”, so as Light on Yoga by BKS Iyengar suggests, “In this pose the whole body benefits from the exercise.” In the Iyengar method, we approach this pose with ease by adding a stack of blankets under the shoulders and a belt for the elbows to help get the support needed to actually stand on your shoulders. The wall and a chair can be also used as support for those who may have weakness or trepidation. Otherwise, what you end up seeing is a “neck stand” or a “back stand” where students end up not getting the direct lift UP and experience of lightness that being on your shoulders brings.

In a society with rapidly flattening necks due to work on computers and looking at phones, shoulder stand done well is a boon to opening the shoulders and the chest and strengthening the whole of the back – not a pose with continued pressure on the neck and spine. Adding a stack of blankets under the shoulders allows those who are stiff (and let’s face it, most of us are stiff in our upper back) to work the opening of the shoulders and chest in Sarvangasana without strain on the neck itself. With that height, the head drops slightly lower than the shoulders in its natural curvature and the spine itself is pulled up and into the body rather than resting on the floor. Jalandhara bandha (chin lock) is the other aspect of this pose that is necessary to gain its full effects. This is achieved by giving ample space and prop to lift the chest toward the chin, not having it sink back away from the head.

As with every pose, if variations are needed, BKS Iyengar has given us many ways to approach and practice no matter who we are or what we are dealing with. Below is an excerpt from the “Effects” section on Salamba Sarvangasana in Light on Yoga by BKS Iyengar:

“The importance of Sarvangasana cannot be over-emphasized. It is one of the greatest boons conferred on humanity by our ancient sages. Sarvangasana is the Mother of asanas. As a mother strives for the harmony and happiness in the home, so this asana strives for the harmony and happiness of the human system. It is a panacea for most common ailments. There are several endocrine organs or ductless glands in the human system which bathe in blood, absorb the nutrients from the blood and secrete hormones for the proper functioning of a balanced and well developed body and brain. If the glands fail to function properly, the hormones are not produced as they should be and the body starts to deteriorate. Amazingly enough many of the asanas have a direct effect on the glands and help them to function properly. Sarvangasana does this for the thyroid and parathyroid glands which are situated in the neck region, since due to the firm chin lock their blood supply is increased. Further, since the body is inverted the venous blood flows to the heart without any strain by force of gravity. Healthy blood is allowed to circulate around the neck and chest. As a result, persons suffering from breathlessness, palpitation, asthma, bronchitis and throat ailments get relief. As the head remains firm in this inverted position, and the supply of blood to it is regulated by the firm chin lock, the nerves are soothed and headaches – even chronic ones – disappear. Continued practice of this asana eradicates common colds and other nasal disturbances. Due to the soothing effect of the pose on the nerves, those suffering from hypertension, irritation, shortness of temper, nervous breakdown and insomnia are relieved. The change in bodily gravity also effects the abdominal organs so that the bowels move freely and constipation vanishes. As a result the system is freed from toxins and one feels full of energy. The asana is recommended for urinary disorders and uterine displacement, menstrual trouble, piles and hernia. It also helps to relieve epilepsy, low vitality and anemia. It is no over-statement to say that if a person regularly practices Sarvangasana he/she will feel new vigor and strength, and will be happy and confident. New life will flow into him/her, his/her mind will be at peace and will feel the joy of life. After a long illness, the practice of this asana regularly twice a day brings back lost vitality. The Sarvangasana cycle (all leg and arm variations) activates the abdominal organs and relieves people suffering from stomach and intestinal ulcers, severe pains in the abdomen and colitis.”

Light on Yoga by BKS Iyengar – “Effects” under Salamba Sarvangasana

I love this posture and have experienced much of the above effects. The vitality and physical effort remains in the body as the brain and nervous system calm and cool. It is the perfect harmony of effort and effortlessness as suggested in the “effects of asana” in The Yoga Sutras of Patanjali (Chapter II, Sutra 48). Honor your mother, who very literally gave you life, and bring life to your yoga with the practice of Sarvangasana!