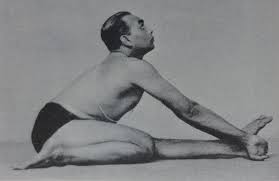 Just thought I would throw one out there that looks like a tongue twister, but by the end of this session, you might start to catch a glimpse of how approachable Sanskrit can be. Look at the bright side – we are only learning words and names, not sentence structure and tense!

Besides the names of two players in Indian history, Virabhadra and Marichi, we have learned some body parts and this week we are adding NUMBERS! A lot of the pose names will contain numbers to describe how many feet or limbs are in the air or stretched outward. And sometimes it might be describing the base or the shape of the pose.

The title of this blog is a great pose to use as an example because of its many elements that come together in a long string.

Ultimately this pose also includes Paschimottanasana at the end – making it an intense stretch of the back side of the body, but don’t worry we haven’t covered that part yet! The base of the pose forms a triangular shape with one leg in Virasana (hero’s pose) and one leg outstretched in Dandasana (staff pose). When you extend forward you are turning to face (mukha) the one foot (eka pada) creating the intense stretch of the back side of the body (Paschimottanasana). Ok, sure the “e” of eka is changed to an “i” in spelling when two vowels come together, but we will cover that a bit later and no one will blink an eye if you pronounce it Triang-mukha-eka-pada either.

You will also hear DWI (two) in a lot of poses in class…our two feet and two hands are put into a lot of formations in our asana! Dwi Pada Viparita Dandasana (the two footed inverted staff which is most often done as a backbend in the chair) and Dwi Hasta Bhujasana (two handed pressure pose which is an arm balance)

TRI, or three, shows up mostly in the description of the shape. Trikonasana (Triangle pose that has not just one, but many formed by its shape) and then this Triang (three limbs or a base of three points)

CHATUR is four and you see this number most commonly in Chatushpadasana (the four footed pose) and Chaturanga Dandasana (four limbed staff pose).

PANCH is five and this is a helpful number if and when you decide to delve into The Yoga Sutras of Patanjali. There are many groupings of five : 5 major Obstacles, 5 fluctuations of the mind, 5 vayus (energetic movements), 5 elements, 5 organs of action, 5 senses of perception, 5 moral precepts, 5 personal observances, etc….

Six (sas) and seven (sapta) are not really needed in yoga as much, but we posted them on the bulletin board at the studio anyway since they are the connectors from panch (5) to the very important ASHTA – eight.

Even if you never get to all the groupings of 5 within The Yoga Sutras, it is important to know that yoga is made up of 8-parts or limbs – ASHT/ANGA. Ashtanga Yoga is known more in the West as the name of a style or form of flow and distinct sequences codified by Pattabhi Jois. But, anything called YOGA really should be made up of the 8 limbs highlighted as the practice of yoga in The Yoga Sutras of Patanjali: Yamas (moral code), Niyamas (personal observances), Asana (postures), Pranayama (breath regulation), Pratyahara (sense withdrawal), Dharana (mental concentration), Dhyana (meditation), and Samadhi (spiritual freedom).

Still a little overwhelmed?? Then, I will leave you with two more fun things to try…