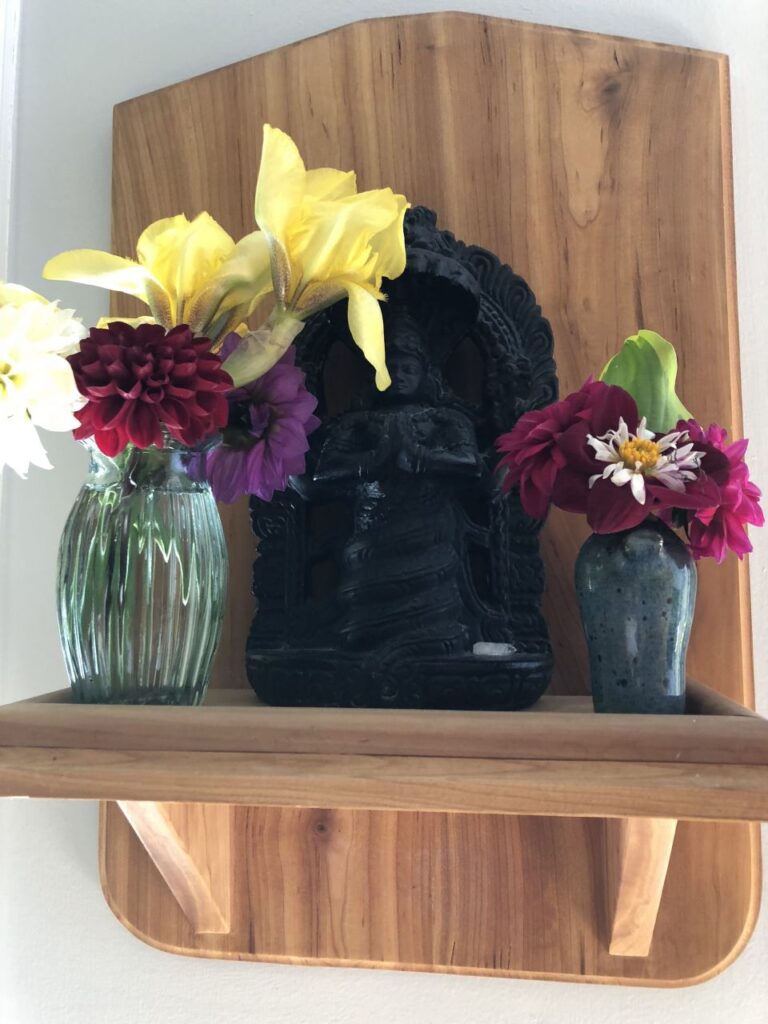 If you have been attending class at The Yoga Place this session, you might be noticing some subtle changes. Nothing big, just some new photos and studio decoration to remind our students of the lineage of Iyengar Yoga that we are learning from in particular and the color and variety of the tradition of yoga in general. So, when you come in to your next class, take a look around, be aware, observe, and be curious…kinda what yoga asks of us. And if you haven’t been to The Yoga Place lately, well, you might want to come have a look!

Before you even walk into the studio, you might notice a hanging in the office to the right that depicts Hanuman, the monkey god. There is a pose called Hanumanasana (essentially the splits with a big backbend of the trunk, arms extended overhead), but we will not cover it on our Sanskrit board as it is not a pose commonly seen in a regular class. But, Hanuman is a BIG (literally and figuratively) figure within yoga lore and tradition as he represents absolute devotion and service to the Divine and holds immense courage and strength to uphold the qualities and focus of a devoted yogi.

Walking in to The Yoga Room you will notice a new photo of Abhijata next to a photo of BKS Iyengar. In the studio, a large poster from this year’s Iyengar Convention of Abhi and BKS now hangs in the corner. She is the youngest of the Iyengar family who has taken the reins of upholding the teachings of her grandfather and also helps run and organize the Iyengar Institute within India. She has been traveling the world as BKS and Geeta used to do to share their light of yoga. For more details on her teaching, you might look back at some of the blogs I posted during the Convention in Dallas this year. She is truly a bright light of this practice and holds a wealth of knowledge from daily, close practice with BKS Iyengar for decades. Of course an image of Geeta Iyengar still hangs to the left and you can look forward to a dedicated bulletin board on her near the end of the year.

Over the welcome desk is the tapestry depicting the Bhagavad Gita, a text also looked at as a guide for yogis along their path of practice. You may be familiar with the hanging, but not the story. Soon there will be a description of the symbolism of this text to encourage you to look a little more closely at the hanging. The journey and mental struggle of Arjuna within the Bhagavad Gita is the journey of all of us through yoga, and his conversation with Krishna (the Divine embodied) delves deep into an understanding of our place and work in the world through yoga.

The last thing to notice is the beautiful batik hanging of the chakras above Patanjali’s statue. The chakras are the energy centers within the body that are all enlivened and balanced through the practice of yoga. As we know, yoga works on all aspects of our being and each chakra has it’s own symbol, sound, and connection to our physical and energetic structure. Prashant Iyengar, BKS Iyengar’s son, is known for his use of the “seed mantras” (among other energetic practices) within asana. These sounds are depicted as the Sanskrit lettering within the chakra symbol.

While you are there, you might also take a moment to look more closely at Patanjali’s image if you haven’t already. None of us would be practicing yoga within any studio without Patanjali and his written Yoga Sutras. Iyengar Yoga gives thanks to him and the long lineage of yoga before and after him through the chanting of the invocation at the beginning of some classes. If you want more information on Patanjali and the reason for his symbolic image, there are handouts to take home in the welcome lobby of The Yoga Place.

We hope you enjoy the changes and in the observation of all that is around you come to a better understanding of your own personal path of yoga and how it connects to the grander traditions of yoga throughout the ages. See you in class!!