The Warriors of Yoga?? 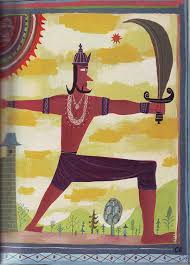 Our first week of Sanskrit study involves poses that are named after the warrior, Virabhadra. And, in rereading the story behind this great warrior, I am reminded of some of the misconceptions, or maybe I should say “surprises”, that the teachings of yoga hold. Virabhadra is not the only weapon-wielding warrior in the lore of yoga. Arjuna, the warrior from the Bhagavad Gita being urged to do his duty of going to war, also brings up a lot of questions and confusions. How does this practice with a moral precept of “nonviolence” hold the same truth of warriors and destruction?

The image of the yogi meditating in a cave quietly is what probably comes to mind for most folks who think of yoga. The Buddha himself has been tied up in the imagery of yoga, though in many ways Buddhism is a completely different practice and philosophy. The reality is that yoga philosophy is full of the dealings of real and practical life and asks you to stay engaged and “in action” through it all. ALL aspects of Nature are needing to be understood and dealt with, including the dualities of birth and death, creation and destruction, beauty and ugliness. It is why I truly LOVE this practice, encompassing the whole of human experience and existence. When Krishna shows his “Divine form” to Arjuna in the Bhagavad Gita, it is not just rainbows and butterflies, but also gnashing teeth and blazing fire!

Yoga assumes that human beings live in the world, that we have a “duty” (dharma) to fulfill, and we have to muddle through and eradicate our own accumulated habits and stresses (karma) in order to find inner peace and outer balance. In India they specifically demarcate a “warrior class” who are born to fulfill the duty of protecting society and upholding the values of life, hence Arjuna who is urged to go to war in order to defeat the tyrants that have taken over the kingdom. To sit quietly and not fight means that society falls and fails in his absence. Even looking at Gandhi, usually given as an example of pure “nonviolence”, he may not have used violence against his enemies, but commited violence against himself through hunger strikes and extreme austerities to move society in a better direction. That is the way of Nature, finding balance within what we on the surface may see as “bad” and/or “good”.

The practice of yoga and all of its self reflection is to bring to light all of our karma and give us tools to uncover the real truth of our pure unchanging Self, our Divine within. Nature with all its “stuff” exists, but we have to fight off all the obstacles that stand in the way of the peace and balance we seek in the reconnection to the Self. At times this takes a “warrior attitude”, an energy that instills courage and dispels fear in the face of an enemy, even if that enemy is something that is a part of you – a bad habit, a negative mental disturbance, etc…We cannot ignore situations that stand directly in front of us, they will just come around again and again until we stare them directly in the face and eradicate them. In Arjuna’s case, though initially there is war, destroying and killing the enemy will ultimately bring peace to the kingdom and fulfill his dharma which also brings peace within himself. Virabhadra, though created in rage and for revenge, destroys the ignorance of prejudice and shame, bringing light back to the Divine.

Using and understanding completely the duality of Nature to uncover the balance and oneness of our True Self is why the practice of yoga is universal! If you are a soldier, a business person, an artist, or a professor, we all hold our own ultimate truth. Developing reflection and introspection in action and finding our own inner warrior will help us fight through stresses, habits, distractions, and prejudices, breaking down obstacles in life and in yoga.

The warriors of yoga are warriors for the Divine! So, don’t be afraid of that power to wield your own weapons against ignorance, dispel your enemies that keep you stuck, and clear the path to find your True Self, the Divine light within.

(Images of both Virabhadra and Arjuna can be found in the lobby of The Yoga Place for inspiration! Come on in to see!)