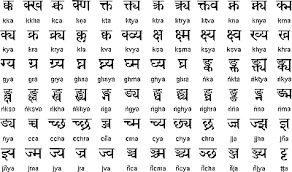 Many of you have participated in the Home Practice Workshops in recent months here at The Yoga Place. The biggest sticking point that comes up most during the perusal of the booklet and the sequences given is the lack of knowledge of the Sanskrit names of poses. As Iyengar Yoga Teachers, we take it for granted sometimes that Sanskrit is seen as “difficult” or “foreign” since we use the English and Sanskrit terms interchangeably in class, translating when necessary. However, I must admit that if I did not become an Iyengar Yoga teacher, would I know the names? What would be my impetus to do so?

Well, in some ways I think that I would, especially since the language of yoga even outside of the physical practice of postures is Sanskrit. To read The Yoga Sutras of Patanjali, the Bhagavad Gita, the Hatha Yoga Pradipika, or any other text that highlights the full practice of yoga, you are going to encounter Sanskrit – even at the very least, the names of the chakras. The nuance and depth and complexity of the practice of yoga in many instances cannot be directly translated into English. By doing so, you lose some of the meaning and direction and direct interpretation of the subject.

Recently, we had a visitor to The Yoga Place from Spain, and it also reminded me of the universality of the practice of yoga and the the need for Sanskrit in a yoga studio. Since Iyengar Yoga uses the Sanskrit names, you can go anywhere in the world and practice. Even if you did not speak the rest of the language, the moment a teacher says Trikonasana or Uttanasana, you will know what to do. I have not found this in other studios where “chair”, “powerful”, “fierce”, etc…are all used for the same pose. Even to Google a pose for information or practice, you are better off using the Sanskrit terms to find what you are looking for or be carried away down a few different rabbit holes.

Why is it that we do not question learning French terms in ballet or Korean, Japanese, etc…in martial arts? If we are here to learn the forms and philosophies specific to yoga, then why do we try to ignore the language of the practice?

You might find, in the end, that Sanskrit is not too hard to learn. It can be quite a “literal” and “phonetic ” language, unlike English with so many silent letters and words that sound the same that have different meanings. Yes, there might be quite a few Sanskrit words for “soul”, but you have to admit that that is a HUGE topic with a lot of nuance depending on context. And, you might find the words get long with smaller pieces all shoved together, but once you know the pieces, you can figure out the rest.

This session at The Yoga Place, we are going to take some time to highlight the language of yoga, give you all the keys and hints to start the process of learning it, and empower you to do yoga whenever and wherever you go!!!

Look to the new bulletin board…it will grow as we progress!! See you in class! You can still sign up for the session or just drop-in to give a class (and maybe some Sanskrit) a try!