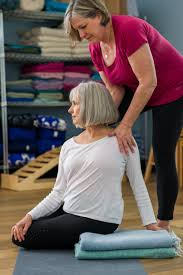 There has been a lot of discussion and community activism around the topic of physical and verbal adjustments in yoga. Since the #MeToo movement began, yoga communities were not exempt from being called out for inappropriate behavior by members, and the Iyengar Yoga community has been coming together in many forums to try to alleviate its own issues. IYNAUS (Iyengar Yoga National Association of the US) is run solely by volunteers and historically only responsible for overseeing our Certification process. But, this National Association has had new committees working tirelessly on updated ethical guidelines and standards for their certified teachers. We have always had “ethical guidelines for Iyengar Yoga teachers” printed in our certification manual, but enforcement of those standards has been tricky, as it has been for all of society. But not anymore. We are in the midst of change and we are excited about it!

Abhijata Iyengar, the granddaughter of B.K.S. Iyengar, is a savvy young professional woman and mother determined to see the light of Iyengar Yoga continue with a voice and a culture that moves forward with these changing times. She knows better than any of us the heart and soul of Iyengar Yoga and just like so many of us hopes to see “traditional yoga”, “Patanjali’s Yoga”, “Iyengar’s Yoga”, survive in “modern” times. If yoga as a practice has existed for thousands of years, we can only hope that it will continue to thrive for thousands more.

Of course “Iyengar Yoga” has only been around for about 100 years at this point, carried on not just by B.K.S., but also by his daughter Geeta, son Prashant, granddaughter Abhijata, and ultimately the thousands of CIYTs (Certified Iyengar Yoga Teachers) from around the globe. Just like any “style” of yoga demarcated by a name or description (hot, vinyasana, Kundalini, Jivamukti, etc…), Iyengar does have qualities that stand out, and physical adjustments and “verbal teaching” instead of just “guiding through motions” are integral to the method. The reason for that is because YOGA as a practice is about CHANGE and TRANSFORMATION. The basis lies in the assumption that our physical and mental bodies have habits that are rooted in distraction or craving rather than following our pure and clear inner Self.

Walking into yoga, we are walking into a practice of study and search for change from the outside in as well as the inside out. For that process we do need guidance, someone who has at least started along the path themselves, done their own study, and done some pretty hard work in the process. Facing your Self and working through issues is not always pleasant, though the result is always spectacular. But, that does not mean you should give up your own power to replace it with someone else’s.

Yes, there is a common saying to “leave your ego at the door” when you arrive to yoga, but it means to let go of preconceived notions, mental habits, and clear the way to learn something new. It does NOT mean to give yourself over completely to the teacher in front of you who is also human and also is on their own path to change. Iyengar Yoga in particular takes this to heart, as we are teaching you a step-by-step method that is like nothing else you have ever done before. As teachers, we learn sequencing, demonstration, anatomy, movement, therapeutic approaches, and the philosophical background of Yoga. We are there to give you the WHOLE practice so that you may take it home and into life with you.

Our teaching method includes the following: Demonstration of poses, teaching of poses, observing and correcting a common alignment issue in poses, then teaching again and observing any change within the students. In the absence of “catching” things verbally and visually, physical adjustments are learned and given to students who might need them. However, there is ALWAYS a chance to OPT OUT!

At the beginning of each Iyengar Yoga class, a teacher is always available to hear the needs or concerns of students. Students fill out forms of medical history, and that is also a time to connect to the teacher about correction or no-correction wishes. The demonstrations and verbal instruction will still be present, props may be given for safety and adjustment, but physical adjustment is optional and privately addressed.

The time in class is time to learn and engage, but true “yoga practice” is yours to implement. So that class HAS to leave an impression. It can’t be a thing you run in to and run out from on your way to the next thing. Iyengar Yoga classes always have a purpose and a goal and we want students to catch that, feel that, learn that.

This “style” of teaching is different than any other modern yoga that I have experienced and for many can feel foreign, with the teacher very engaged in what the student is doing and learning. Most of us might prefer to just come into class quietly, move a little, and get out without detection, but that is not how Iyengar Yoga works. In my opinion, the benefits of this more “traditional” teaching approach outweighs some of the discomfort of being seen.

And, I do believe that Iyengar’s more traditional approach to yoga can evolve and move into the modern age of social change and personal empowerment. In my lifetime that is what Iyengar Yoga has given and taught me and I see change in our organization and the Iyengar family themselves. Social structure and human foibles will always exist in any community – microcosms are always replicas of the macrocosm – and yoga communities are no different. However, the basis of yoga’s success lies in the thousands-of-years-old trials, traditions, and teachings of those who have come before; to lose that connection is to lose yoga all together.